For the Fireflies – a sequel to the Stone Trilogy!

Did you know that I'm writing a novel exclusively for my newsletter subscribers?

It's a sequel to the Stone Trilogy, and it tells the stories of Joshua and Allie, Jon and Naomi's children.

If you want to read along, sign up for my newsletter! At this point we're releasing a new chapter every Friday.
I promise that you'll NEVER be spammed! You can find the subscription field right here >>>> at the top of the right-hand column of this blog!

I'm sharing the opening of the novel with you to whet your appetite. Enjoy! 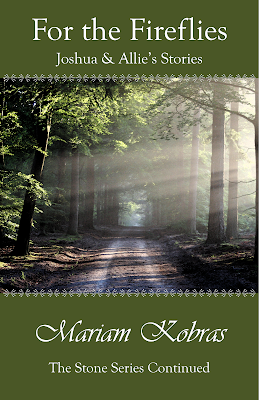 It was early morning when he left.
Dawn had barely crept over the tops of the trees, and the world was silent save for the lonely cry of a loon, piercing the mist over the water.
His backpack in hand, guitar case over his shoulder, he followed the driveway through the property until he reached the road. At the gate, he stopped to look back.
Pausing, Joshua drew a deep breath. One more step, and he’d be outside. He’d be free of his past; now just another stranger lost in the world.
Once they realized he wasn’t going to show up for breakfast, his mother would go to his room, and find the note he’d left on his pillow. It wasn’t a long letter, but she’d understand right away. She always did. She always knew.
Hoisting his backpack, Joshua moved forward, the sun at his back, the empty road ahead.
It didn’t take long for a driver to stop. He thought it was hilarious that something as mundane as a milk truck would aid him in his flight.
“Where to?” the driver asked, his shoulders shaking in rhythm with Gloria Estefan’s “Conga.”
“The airport. I have an early flight and didn’t want to make anyone drive me. I was pretty sure I could catch a ride.”
“You got lucky then.” He was wearing a muddy-blue baseball cap ringed with sweat stains that resembled waves as they crashed on the beach. “Where are you headed?”
“New York.” Would his family find his friendly chauffeur? How much information was it safe to give away? A grin tugged at Joshua’s lips. As if it mattered. “I have a new job waiting for me.”
The man shot him a dubious glance. “I’m only going into Kleinburg. How are you going to get to the airport? You’re not going to hitchhike all the way, are you?”


“I’ll take the bus.” Another lie. Yes, he was going to try to hitch a ride, but not toward the airport. He wanted to cross the border on foot, or as a passenger in the car of a friendly stranger. He has certain no one would expect that of him. His parents would check the airports, heliports, car rentals, maybe even the train station, but they’d never imagine that he’d set out on foot.

Posted by Mariam Kobras at 1:02 PM No comments:

Remember when I promised you photos of the magnolia tree across the street?
Well, here they are! The tree is in full bloom.
The owners were sitting outside on their front steps, enjoying the lovely spring day, when I stopped to take the pictures. I asked if it was okay and they replied, "Of course! Go right ahead!"
I think they're quite proud of that tree. 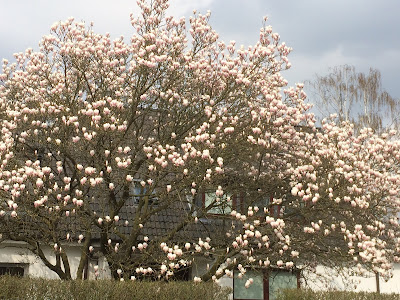 And if you ask me, with good reason. 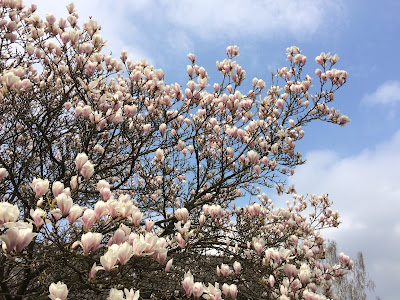 When that magnolia tree bursts into bloom the entire neighborhood knows that it's finally spring. 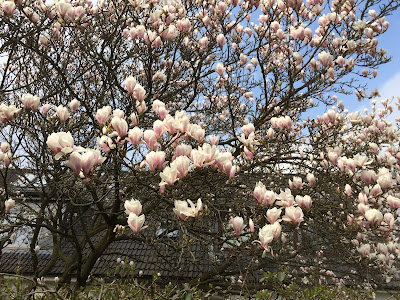 I also found some bluebells (and yes, this time they're really bluebells!) 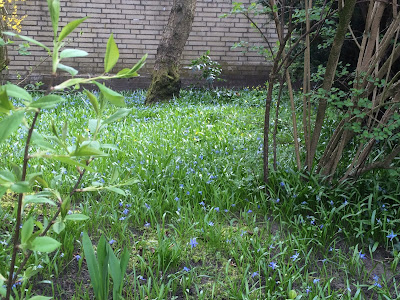 And the forsythias are out in full force! 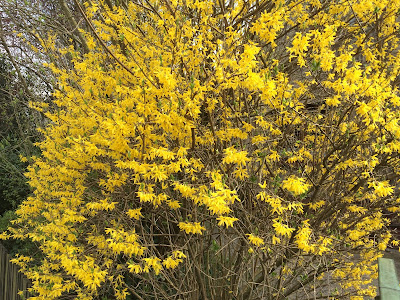 And I found some pansies. 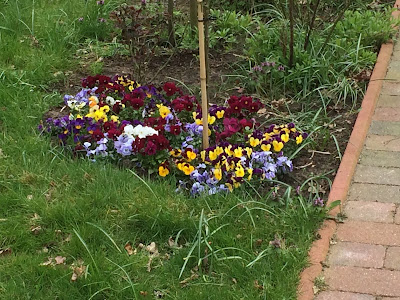 Hope you enjoy spring as much as I do!

Oh–and here's a recording of the nightingale that lives in our backyard! Don't worry, the video is black (because it was made during the night, duh) and the quality isn't the best. I made it with my iPhone. But you can still hear the nightingale!


Posted by Mariam Kobras at 5:02 PM No comments:

A Walk into Spring


It's April 1st. and spring has finally showed its pretty face!
My hubby and I took a walk around the neighborhood today, and this is what we found: 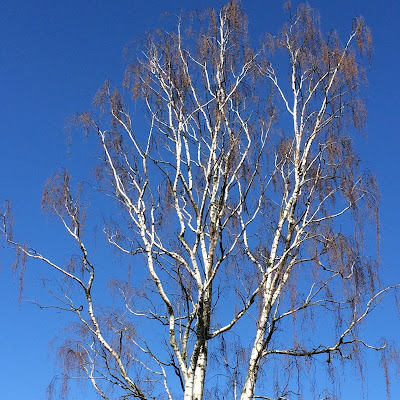 And that blue sky and the birch tree look like a painting, but they're real! 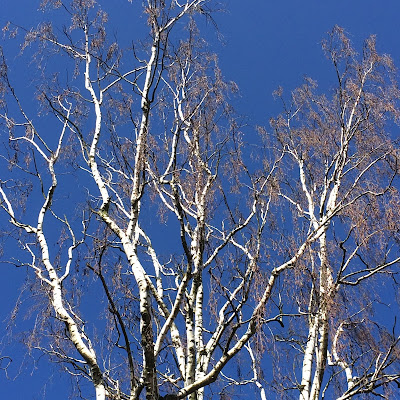 The magnolia tree isn't in full bloom yet, but it will be soon! And I'll make sure to visit it again and take a photo when the blossoms are open. 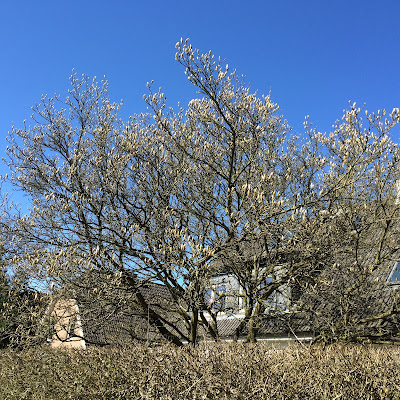 We went a different route today and found this blooming beauty: 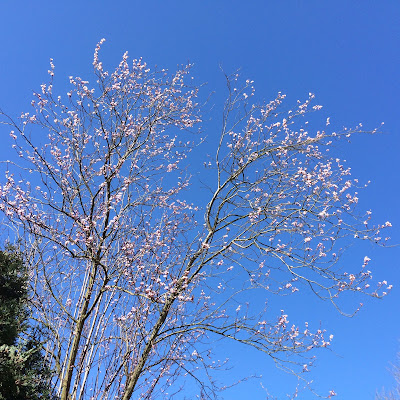 I have no idea what it is, but the dainty pink buds look so pretty against that wonderful blue sky.

Here are some bluebells in a front yard, raising their little faces to the warm light of the sun: 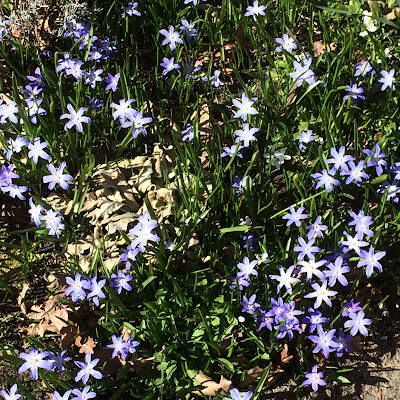 Actually, they aren't really bluebells, are they? They look more like tiny blue stars. Don't ask me what they're called. I'm botanically illiterate. No, seriously. 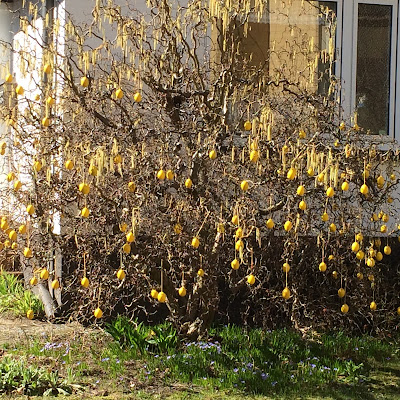 We came by an Easter tree that hadn't been cleared yet. I like how the people who live here stuck to the bright yellow. Doesn't it look like a little sunshine tree?

And finally, before we walked back home, these planes flew by overhead. My Vancouver friend  Sue calls these crossing vapor trails "kisses in the sky". 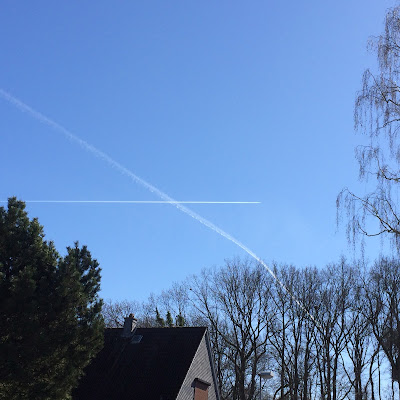 Sue, this kiss is for you! Can't wait to see you again in September! xo
Posted by Mariam Kobras at 6:15 PM No comments: