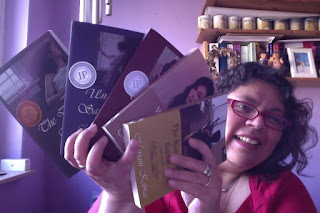 Mariam Kobras is the author of the award-winning Stone Trilogy; The Distant Shore, Under the Same Sun, Song of the Storm, and the prequels, Waiting for a Song, Naomi's Story, and The Rosewood Guitar, Jon's Story.

Born in Frankfurt Germany, Mariam currently lives in Hamburg with her husband and two sons. After studying American Literature and Archeology at Giessen University she spent several months in Toronto, Canada. Mariam has worked as an English tutor, served as a lay Judge in Juvenile Court, and managed the rookie Hamburg Blue Devils American football team.

It was after she founded the Theater Project at the local Hamburg High School, where she wrote and staged plays with great success, that she found the courage to try her hand at novel writing. Her husband gave her a laptop for Christmas to encourage her writing, and soon she was off and running. Within a year she had written her first draft of what would become The Distant Shore.