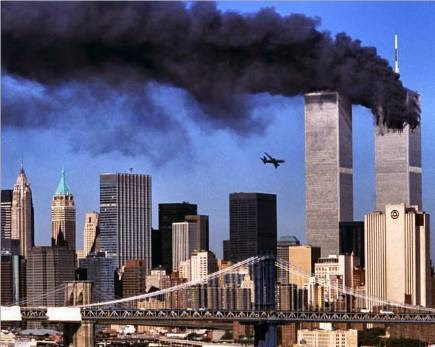 It is the day of the year that changed life on this planet forever.

Nine years ago today, New York City was hit and hurt by evil, single-minded and cruel people who thought they were fighting a "justified war" but only killed thousands of innocent people who were on their way to work or had just  started it.

I know this has been said thousands of time before, and I think I even blogged about it before,  but it needs to be said again and again so no one will ever forget what happened that day.

On a very personal level, I remember being at home that afternoon with my baby Louis and waiting for my bigger son to come back from school.  My friend Wera called out of the blue and at first I was delighted because I thought she was going to invite herself over for a cup of coffee. At that time, I was a stay-at-home-mom and bored to tears.

But she told me to turn on my TV, and had I not heard about the airplane crashing into WTC? I hadn't. Nightmare blossomed on the TV screen. Both towers burning, people jumping from the 80th floor into certain death, police and fire fighters helping others to escape the danger zone, and the many, many dazed, terrorized, unbelieving faces staring at the crumbling towers.

Seeing that happen and understanding it were two totally different things.

We had been there, my husband and I. We had been up in the 87th floor and looked down at the city, and we had shopped in the mall that used to be in the basement. We had known people who used to work there.

The following days, we watched how men from all over the country arrived to help find survivors and begin the long, terrible chore of removing the rubble, and how people came to try and find their loved ones. How they created that wall where they pinned up the photos and put down the candles.

We watched how war was carried into the heart of America, and we Europeans understood right away how this would alter our lives. How it had to.

My family and I, we live in Hamburg. When the perpetrators were tracked back to here, I wanted to die with mortification. They had studied at OUR university, lived in OUR city, shopped at supermarkets and used subways just like we did. But they were killers. Murderers, who thought crashing planes into public buildings in a crowded American city would do anything for their justice.

I don't know what we, as world community, have to do or say to bring these terrorists to their senses. Or if there is someone alive who will get through to them and make them stop their hate and fury. I sincerely hope so. Because I want my children to grow up in a friendly and peaceful world. And in one they can travel without fearing for their lives.