High fantasy, romance, quirky humor and writing that reminds of Jane Austen - all these you can find in Michelle Franklin's novel Khantara! It's my honor to welcome her to my blog today, where she stops by on her blog hop to celebrate the release of her novel.
I will tell you this much: my favorite character is "the wren".

If you like fantasy, and if you appreciate a good read, this is for you! 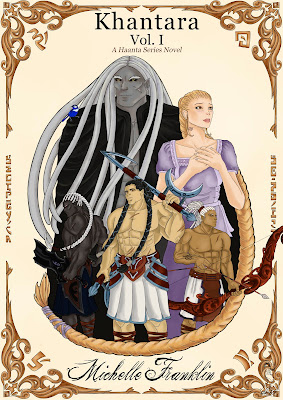 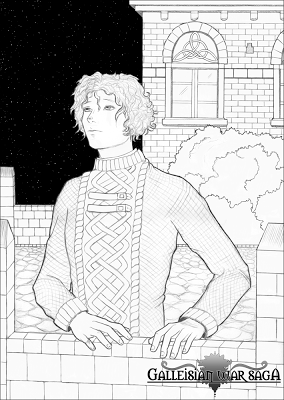 Don't miss the next installment!

Author – To Be Or Not To Be 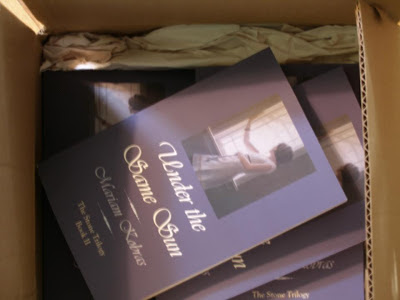 A friend in the publishing industry just posted this question on Facebook:

"Just curious ... has being an author turned out to be what you expected? Or something completely different?"

She caught me at just right time and mood for a crabby, tired and uninspired response.

This is what I said:

“It's more, and less. There's a hell of a lot more work involved, with all the promoting and marketing that is expected (even though I'm traditionally published), and a lot less money than I thought.
It takes a lot more patience and good will than I expected too.
To sum it up, it's a job like any other, with ups and downs, bad days and good days, some perks, and then there are those moments when you want to throw everything in a corner.
But it's also living a dream.”

There's really very little to add to this.
And yes, the question made me feel strangely crabby.

During the past four days I've written exactly three sentences on the novel that is due for submission in July. I have 50K words written, which is a little more than a third of the book, and time is running. I'm not a fast writer; 2000 words a day is my limit.
So yes, I feel the pressure. And I'm one of those writers with a hint of OCD: I deliver on time, which, for me, means I deliver a month before the deadline. This is something I'm proud of. No publisher will ever have to remind me of my deadlines. This I promise.

But here's the thing, and this is what made me crabby just now.

Once you're an author, a writer who has signed a book deal, you're also someone who works for a company. Don't fool yourselves: it's just that. A book deal is nothing more but a work contract. The moment a publisher accepts your first book, everything changes, and this is something you have to realize.
This isn't a hobby anymore. You now work for someone, and they want to see profits.

An author friend (pretty recently signed, I want to add) told me the other day, "All I want is to be published."

I tried explaining to her that "just being published" is not how this thing works. That a publisher acquires manuscripts to sell them, and the more the better. They don't offer contracts because they "just" want to publish a pretty story. They want to make money, and preferably a lot.
Things are harder for authors these days. With self-publishing swamping the market with cheap or free books, it's harder than ever for publishers to place their books so they'll be noticed.
I know, because I'm there.
Publishers expect authors to pull their own weight, and rightly so. The book we sold, it's our product, isn't it? We created it, and like an engineer who developed a new car or plane, or a rocket that will take tourists to Mars, we have to stand before the customers and sell our product.

It’s not just about the book anymore.
If you want to be successful as an author, you have to be a pop star.
Do you know Neil Gaiman?
Look at him, and you know what I mean. He’s a pop star among authors.
So if you want to be an author and not stay “just” a writer—which is totally fine–but if you aim to get your stuff published, move your butt. Leave your writer’s den and the cozy silence of your home and shine.
Make people notice you, and if you can, make them like you. Make them curious about you, and they’ll start reading your books, too.

So, back to the crabby.
Yes, I’m crabby.
I’m crabby because I’m not getting any writing done, when I should be writing, because…

Here’s another thing.
As an author, you have to think corporate.
It’s not just you and your publisher.
It’s you, and your editor, your copyeditor, your fellow authors at that publishing house, and dozens more people who depend on YOU. You’re part of a corporation. You’re making money for others, and they are making money for you.
One of your fellow authors has a promotion running?
Get out and help! Use your network to help sell their book, and when it’s your turn, they’ll help you. Hopefully. If they have the right attitude.
I’m helping a fellow author right now. That’s why I’m not getting any writing done, and that makes me crabby.
But it’s a good kind of crabby, because I know tomorrow my own promotion begins, and my publisher, my editor, and afore-mentioned fellow author will work their butts off to support me.
We are not alone.
We don’t have to be alone.

Okay. Now that I’ve gotten this off my chest I’m going back to recruiting twitter friends. I’m asking them to help me spread the word tomorrow, when my own giveaway starts. So far, everyone I’ve asked has gladly offered help, and I’m deeply grateful to them.
I think we’ll have a blast.
So see you tomorrow on twitter, Pinterest, Google+ or Facebook, where you can grab a pretty neat present from my publisher and me!I

I mean - haven't you always wanted to read one of my books and just never got a chance? ;)