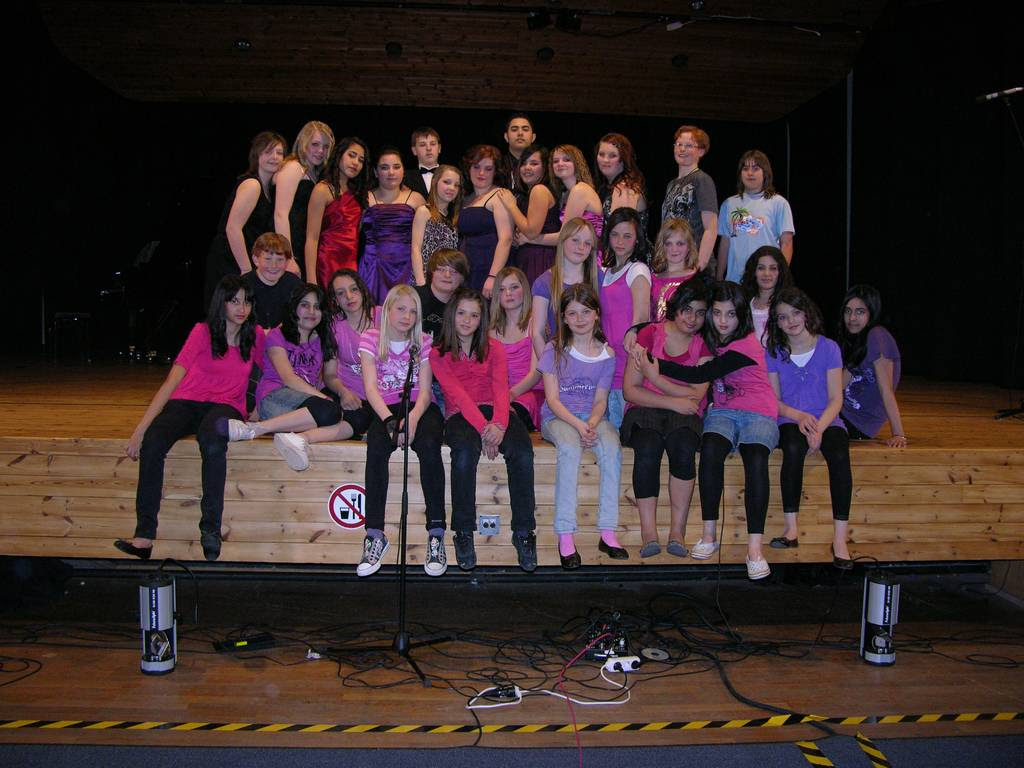 So this is how it went.

One spring day, driving through the city with my hubby, window down and a mild breeze brushing my face, I turned on the radio to one of the Oldie stations, and this song hit me:

My hubby has known me for a very long time, and  he did not argue but just said, "Ok."

So the next day I walked over to the school where he is a teacher, and into the superintendent's office, and told her, "Look, there is something I'd like to do for you. I'd like to teach a musical class at your school." And she was more than happy to have me to it. Within a week, I had a paid job. The first in my life, too, at 50 years.

No I'm kidding, of course it isn't. But that is how I got the job that I'm still doing today, four years later.

I'm not a music teacher, and besides the recorder I don't play an instrument. I'm a singer, well, yes, that I am. After fifteen years with a chamber choir and many, many hours of singing lessons under my belt I felt confident enough to teach others how to sing, and since the kids at that school never had a musical education and can't "read" music anyway I felt it did not matter that I would not be playing the piano to them. Also, there are no kids who can play an instrument other than a cell phone, so no orchestra or band for my singers.

So I said I wanted to teach musical, I got a contract and a work place, an auditorium and a very pleased super who could not wait for our first show. Only.... WHAT SHOW???

There were only girls in my group (ok, two boys, but they wanted to learn about light and sound and not be on stage), and I had NO idea what to do with them.

At this point I must digress and tell you about our school. Most of our students are between 10 and 16 years old, with the odd 18 year old tossed in who needed a few extra rounds, and nearly all of them are from socially unstable or very challenged homes, or migrants with little knowledge of the German language and even less English, or they are in other ways "special". So, no theater experience in any way, and please, Miss, what is a musical?

Oh ok, we'll do Chorus Line. That's nice and easy, and it's not gender specific, we'll just turn the boy roles into girl roles. Easy, no?

Because I'm a good person - basically  - I called GEMA (the German version of ASCAP) and said, "We want to put Chorus Line on stage," and they said, "No." And then relented a bit and informed me that I would have to ask the composer, via the record company.

And at this point, folks, I'm going to let you in on a really, really big secret: if you want something really badly, all you need to do is ask nicely and play dumb. The lawyer lady from the record company promised to do what she could. And nothing happened for eight weeks. In the meanwhile, I had thrown my hopes to the wind and written my own play, but then one day an email arrived that was the actual permit to use the music from Chorus Line. Next thing, a totally hysterical guy from above-mentioned GEMA called me. "What have you done??? How did you do it?" "Uhm, I asked?" He went on to tell me that NOT ONE SCHOOL - NO ONE in Germany had yet ever - EVER, YOU HEAR ME MADAM - had been able to get that permit. And I replied (naive, mind) "Oh well, someone had to be the first."

Not that we ever used it. By then, we had started rehearsing our own, self-written show, and put it on stage, and it was a huge success. I printed that permit out and framed it. I'm the person who may use the Chorus Line music on stage. Legally. In Germany. Me. ONLY me. Well, at least the only one without having to pay a fortune for it. I got it for nearly free, only the regular GEMA fees, which are a pittance for schools.

My super was impressed by our show. And since it was the end of her fiscal year and she had some money left over, she went shopping for us. Just before Christmas, we had our own sound and light equipment. A NICE equipment. And it is only for us.

Now, I have two classes, and from next year, probably a third. We put on three to four shows every school year. The Mayor and city council always attend our shows. We always make it into the newspapers, and the best part is, by now they don't only write about the great work at school, but about my plays, too. Last year, they said my play was "fast, funny and credible". I mean.... good, or what?

You may have guessed by now. I love my job.