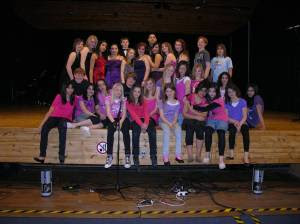 My dear Ginny, a wonderful facebook friend from Houston, after reading a "status" I had posted, asked if we rehearsed right up to showtime, and this made me think about a performance day really goes.
It also made me think of the little peak of iceberg others see when the curtain opens for my girls, of the many hours and weekends we put into it, and how "terrible" a show day is.
I'll try to give you a glimpse of the rest of the mountain.


This is what my troupe looked like 30 minutes before the show( photo courtesy of Fiona Ransom).
They are groomed, dressed, relaxed (more or less), well rehearsed and excited to take to the stage.

8am: School begins. For all of the kids, this is a normal school day. Which means they really don't want to be there at all, and MAN math is boring today, and can't we start rehearsals early? Do we REALLY have to go to class? Well yes, for a while, you need to. Sorry folks.
Generally, I'm in the teachers' room, getting the final copy of the CD and lyrics sheets ready ( you can BET someone forgot theirs). Which does not mean they will need them at night at all, but those papers are like a security belt during the day.

10.25am: the "big" break. A cluster of students outside the teachers' room, wanting to know if there's anything they need to know, do, change.... go outside, eat something, chill. Please.

12.00 noon: my technicians ( two 9th graders and two 5th graders) and I go over to the auditorium to start the set up. The school bought a really nice sound and light equipment for us, as far as schools go, a couple of years ago, and spent about 10k$ for it. And it is EXCLUSIVELY ours. No one else in the school is allowed to use it. And we have really, really good microphones ( the same brand Neil Diamond used on his tour in 2008.... made me feel very important!). The boys will do a sound check, of course, and I time how long it will take for our headmistress to show up and complain about the noise.... after all, the rest of the school is still having lessons. No matter. We like to announce that it is show day.

1pm: the girls start to arrive. Some of them have their lunch in hand and have to stay outside (NO eating in the auditorium!!!), the others use the stage as couch. The usual picture would be: four or five teenagers lying around on their tummies, cell phones or iPods in hand, sharing and talking about music.

2pm: rehearsals start in earnest. First nervous breakdown because someone forgot her lyrics and needs a sheet < why I was in school early and made new copies.

2.10pm: trouble with the microphone cables. Ildal throws a tantrum. Only a mild one, and it is over as soon as I hand over my own, privately-owned Sennheiser mike. For now.

3pm: We did the setlist once, and there are no major flaws. The girls are getting nervous because they want to dress up. I tell them they have another four hours, and to relax. We call a break. Despite dire threats to life and general well-being two or three disappear to the church yard across the street for a cigarette. My hubby brings me something to eat and fresh coffee.
By now, my son Mario has joined us and gets sound and light properly rigged with the boys. Suddenly, the music sounds a lot better and the disco lights are working..... the auditorium is darkened, stage magic appears. The atmosphere changes, and the kids' mood with it.
This is a moment I love every time we perform, and it is very tangible.
Only a moment before, we were at school and rehearsing, now we are in a venue, and getting ready to perform.

4pm: our dressers show up. The performers retire to the dressing rooms below the stage to get ready.

4.33: another speech about how NOT to use perfume before you go on stage. Geez.

4.45: Ildal takes her second tantrum, this time worse and LOUDER!!!! than the one before. Her voice sounds especially dramatical in the basement hallway.

5pm: At least half of the teachers notice now that they did not buy tickets for the show and want some.
Which is distracting but nice, because it means they will come.

5.30: fourth pantyhose emergency, because Ildal sat  down on a bench in the church yard and tore hers.

6.00: box office opens. A couple of older brothers sell tickets and do security duty. Some 5th graders try to wheedle their way in without paying, which is sternly denied.

6.10: a brief warm up in the basement hallway. Chasing out some curious 10th grade boys at the same time.

6.22: second bra emergency. The safety pins and tape come out of my big bag.

6.25: Ildal throws her third tantrum, this time with tears and vows to quit RIGHT NOW. She is sent off for another cigarette with the admonition to return ASAP because her make up has to be redone.

6.30: the gates open. I'm not yet changed, sweaty and exhausted and near panic. And - uh oh - the mayor of our city walks up to me and shakes my sticky paw. That's just what I wanted. Well, he is also my boss, so he might as well see that I do indeed work for my money.

6.50: the auditorium is  filled to the last seat. The lighting and sound are working. Technic team are on their places. Curtain is closed. Both headmistresses have shown up, nearly all teachers are there. Reporters from local newspaper and from the big paper in Hamburg are present. Mayor and other politicians are here.

6.58: one last visit to the dressing room: the girls are serenity incarnate. We form a huddle. We hug. I cry a bit.

7pm: back in the auditorium and in my seat next to the nice headmistress. Soaked through, ready to drop, sore from shouting at Ildal.

The music begins, the spot light lights up, and the curtain opens: and yes, every minute was worth the effort.
Posted by Mariam Kobras at 3:45 PM 12 comments:

I'm going to be mean today.
it's graduation exam time, and the 9th graders who are about to leave school are studying for their oral English exams next week. They come to me for coaching,  hoping I'll be able to teach them everything they did not learn during their past four years in two days. But "That's not how it works," of course,  said with the wonderful words of my novel's female main character.
The first part of their test is an introduction of themselves and their families.
So I tell them to write it down in German first, and then to translate it, and then we do the corrections together.
Today, I was served this by a girl. She is 17,  her origins are Turkish, and she is one of the GOOD students. just to give you an idea. And a laugh. Go ahead. Don't think of the girl, think of the garbled language and enjoy. I'm going to copy it out for you. Verbatim.


About my family is that. I going with my parents often in the same shopping center.
On the weekend when the sun shines we go whole family to the same (the river is in Wedel).*
We grill there the whole family and play there a lot of things like volleyball.
Another thing is that we fly in the summer holidays in Turkey after Antalya. We stay there in the hotel stay for weeks and then 2-3. We then visit my uncle in Antalya and the other known in Antalya.
After we drive to Gaziantep the drive to G. takes about 14-15 hours.
When we arrived in G.for my uncle before bus station.  Our village is located about 60 km from the city.
There waiting for us we are in our village verwandten. We then where all our well-known. Our whole town then come to us to say hello and we kiss and then left to right, Then come my friends and cousin to suit me hello.
In our village are only drive a bus stop where the buses at 6.00 in the morning and come to 2 clock will be so again. As the court is legally there great celebration. From our village  is a small brock which flows out to Eufirat. In this little brock there are 40 small also the pose from among the raussfliesst.
When we go the whole family for picnics.
We go there with the tractors but most of the few routes  to go on foot because the stretch is quite dangerous  because the ride is uncomfortable.
We stay 4-6 days in the village then we drive into town to buy something for the road home. Example, when accounting, baclava, pistachio and wider clothes.
So our adventure ends holiday in Turkey.