It's funny how these blog hops change things.
Suddenly, I'm friends with so many more people, people I knew from Twitter but who seemed so far away in space and time that we never really got to talking.
One of these people is the wonderful Carrie Bailey, who lives in New Zealand. It's the other end of the world, for me.
When I asked her if she would participate in my blog hop for Under The Same Sun she agreed immediately, which is why New Zealand is reading about me and my books right now. Well – not all of New Zealand, of course. But some folks.
Here is one interesting snippet about Carrie: she was almost a hobbit.
When Peter Jackson went to New Zealand to film "Lord of the Rings" she almost applied to be an extra in the movies, as a hobbit. But she didn't. Which is why I can't point at the screen every time we watch those movies and say, "Do you see that hobbit girl with the tankards? That's my friend!" 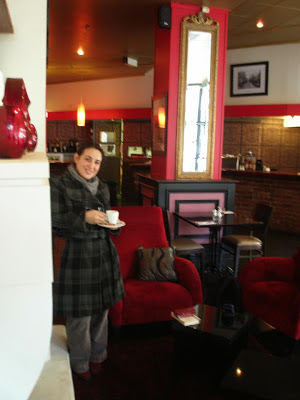 So here is Carrie's guest blog. Welcome to Germany, Carrie!


A month ago I was watching television in my moldy little Wellington apartment with my kiwi (New Zealander) boyfriend when what might have been the single greatest opportunity of my life flashed across the screen. “Watch all your favorite shows at the same time as the Americans!”
That struck a cord. I’ve always lived in strange and isolated areas and grew up out of range of cable broadcasting. I remember thinking as a kid living on the westernmost point of the Oregon coast, “Hey wait a minute! Those people in Eastern Standard Time get to see National Geographic before we do.” Such things leave one feeling somehow left out, don’t they?
Since moving to New Zealand, I’ve come to believe that time zone related resentment is an understudied phenomenon. I don't often watch television, but knowing I could have access to it at the same time as my family and friends do back home does make me feel very 21rst century. It’s a good feeling, like being part of a global community rather than dangling off the very edge of it. Did I mention we line dry our clothes here? Even when it’s raining, because clothes dryers are considered optional?
And then, there’s the Internet access. A few years ago I would have thought that my New Zealand standard 40 GB per month Internet service might be the basis for a horror movie: The Country that Charged by the Gigabyte! But, hey, that’s the real New Zealand.
There are no hobbits and all of that beautiful scenery from the Lord of the Rings is largely tucked away out of view on the South island. Geographical isolation has its benefits though. Take the kiwi bird for example. The steep New Zealand hills were full of oddly shaped flightless birds of all shapes and sizes. Isolation allows unique things to develop like a quasi-religious national obsession with their beefy rugby team, the All-Blacks who always perform the indigenous Maori war chant called a haka before games, or Peter Jackson’s movie industry, which sprung up from nowhere almost overnight to make The Lord of the Rings Trilogy.
With such a small population, it seems nearly everyone participated to make things happen. I admit I almost went to the casting calls to be an extra for The Hobbit, but stopped short, because I feared I might end up remembered forever as female hobbit, scene five, holding the green mug. “Yes, I was bar wench hobbit standing behind Bilbo for two seconds about ten minutes in,” I would have to say over and over again to German tourists in my half-Oregonian half-kiwi accent.
By the way, that kiwi boyfriend I mentioned earlier was one of the enormous mucous-covered, heavily muscled creatures from the invasion force in the second Lord of the Rings movie. Or, at least, he and half of Wellington helped provide the sound effects for the opening fight scene by loading into the stadium and stamping their feet in unison. So, in a way, he was. In a small-framed-high-fore-headed-accountant-looking sort of way.
Unfortunately, I’ve never had any real interest in acting. I paint. I do graphic design and I write. I’m writing a dystopian novel set in New Zealand’s future. Though nearly indistinguishable from a fantasy novel set in ancient Babylon, there are considerably more flightless birds in my story. And while no New Zealand authors are household names, I’m not without hope. It is a major global oversight. This country has a unique region of immense biodiversity, isolated and peculiar in the most compelling ways. The largest insect in the world lives here. It’s like a grasshopper on steroids. If you want to see something different, something inspirational, here is good for that. If you want to watch streaming video? Maybe not so much. Fortunately, we’ve got this lovely little shop down the road with a thriving DVD rental business.
It was The Country that Time Forgot, but for me, it’s the best writing environment I could imagine. And the time zone envy? I got over that once I discovered the DVD shop have a sizeable videocassette collection, too. No, really! I was even asked if I had a machine that played them once. When was the last time you saw one of those?
Don’t be jealous. You come for the Hobbit premier and you can get the cassette as a souvenir.
Carrie Bailey